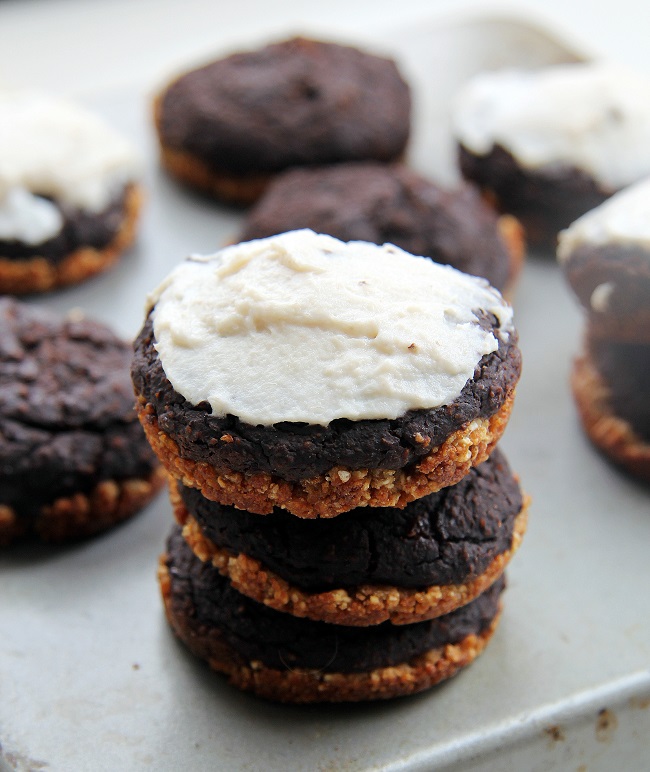 I really wanted to call these s’mores cups. I mean, everyone loves s’mores and these have all the components of them… they’re just a bit different.

Graham crackers turn into a crust made from cereal, chocolate turns into, well, a chocolate cake filling, and the marshmallow is replaced with a banana and yogurt mixture that I swear has the exact same texture as the filling of an oreo cookie. 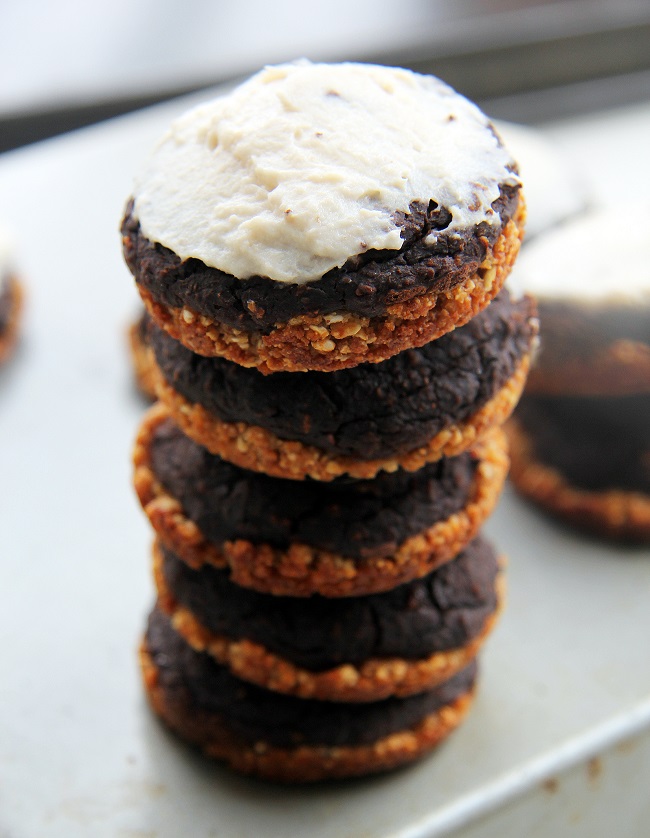 So, you see, these are sort of like s’mores, but then again, sort of not. I figured it was better not to give people any false beliefs, so I stuck with the name Chocolate Banana Cups. It’s a bit boring, I’ll admit, but no one’s going to deny that this recipe is, indeed, for Chocolate Banana Cups.

Ok, so that was sorta boring. Sorry. 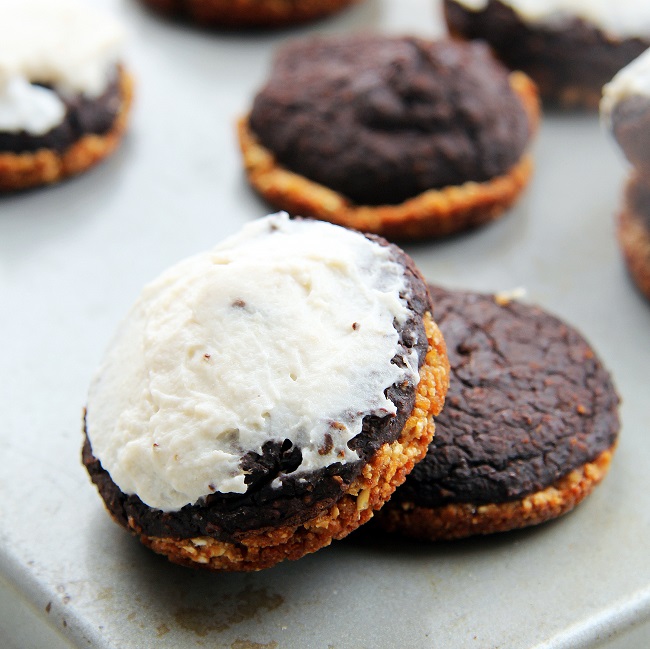 Let’s get to the good stuff, shall we? Like the banana frosting stuff on these cups. I mentioned it earlier, but I’ll say it again. Same texture as an Oreo cookie filling. It’s incredible, really. And very delicious.

So is the crust on these things. It’s made with my new favorite cereal, Kashi Crunch!, and has no added fat. Pretty cool, huh? I’d say these little guys as a whole are pretty awesome.

They may not be s’mores, but they’ve definitely got a lot going for them. 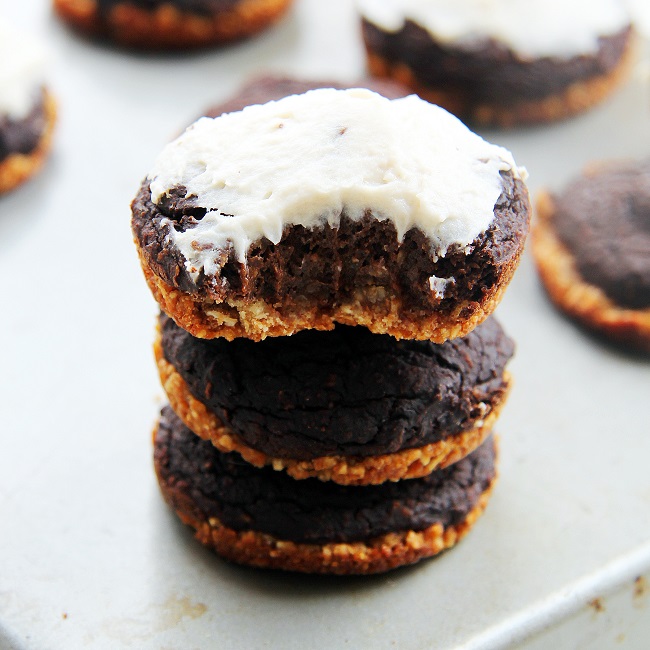 Preheat oven to 350F. Place cereal in bowl of food processor and process until broken into small crumbs (this could get loud). Add yogurt and process until fully incorporated. Press a little bit of mixture into the bottom of the cups of greased muffin tins. Set aside.

Place oats in food processor (you don’t have to wash it from when you made crust), and process until ground into a flour (it’s ok if some pieces are bigger than others). Add remaining dry ingredients and process quickly to combine. Add all remaining ingredients and process until a smooth batter forms. Scoop a bit spoonful of batter on top of each prepared layer of crust. Bake in preheated oven (it should be a t 350F) for 15 minutes. Let cakes and crust cool at least 5 minutes before attempting to remove from pan.

Rinse out the bowl of your food processor until no chocolate remains. Place banana and yogurt (all ingredients for frosting) inside and process until a thick frosting like mixture forms. It should look like an Oreo cookie’s filling. When cups have cooled, and have been removed from pan, spread frosting on top of each one. Store in fridge. Recipe yields 12 cups. 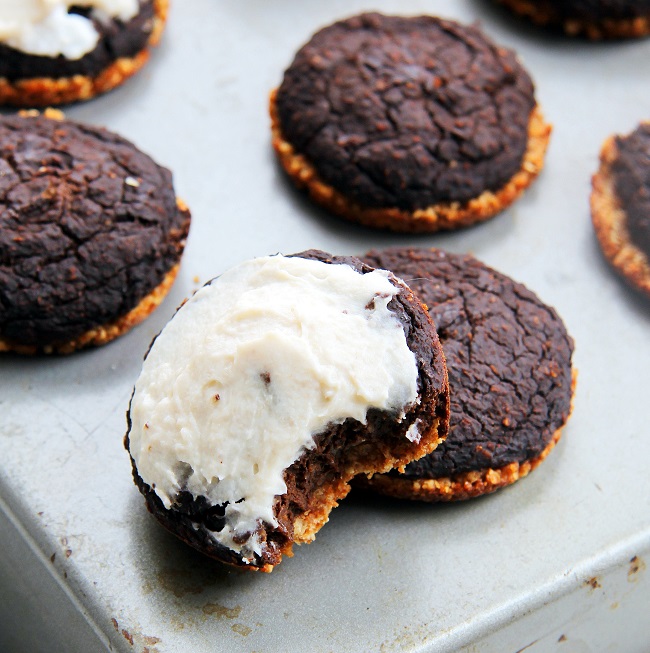 Now, time to healthify an Oreo cookie. Don’t you be thinking this is the last you’ll see of that banana frosting! 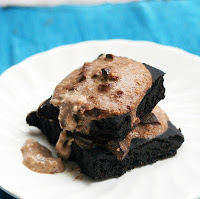 {By posting this recipe I am entering a recipe contest sponsored by National Dairy Council and the Quaker Oats Center of Excellence and am eligible to win prizes associated with the contest. I was not compensated for my time.} I’ve done it. I’ve made a pie healthy enough for breakfast. You’re can thank me later….